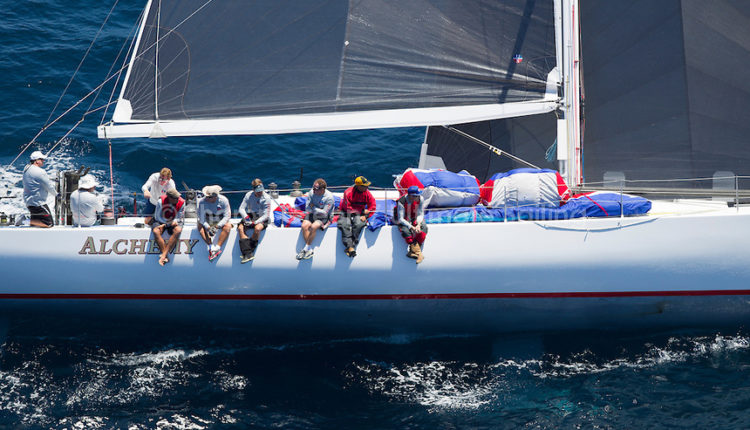 Battle of the sleds 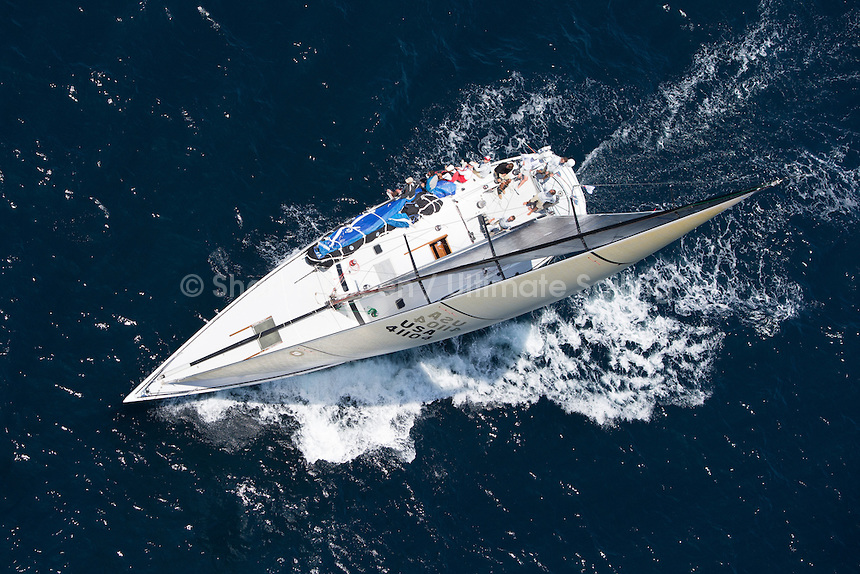 Going back 30 years when Bill Lee first designed Merlin I am not sure anyone knew how the sailing world would change. ULDB Sleds started being built and sailed around the world. and crushing records. The most popular was the IOR Sled fleet. It started on the West Coast in Bill Lee’s chicken coup and then other designers like Alan Andrews, Nelson Merek, Riechle Pugh all got in the game. The racing of these thoroughbreds was extremely competitive and the premier class of most regattas and ocean races. In the 90’s with the demise of IOR some of the sled owners “Turboed” their sleds and broke even more records. Many sleds moved to the Great Lakes and developed a third life. New more advanced boats started to be built and the sleds were no longer the highlighted class at many events.

Fast forward 30 years to 2012 and the sleds have developed again into a premier class. Many of the original owners have purchased sleds again, some new owners have stepped in and the fleet is alive and well and once again a great fleet being a premier class. In 2011 the Cabo race had Alchemy and Holua battle it out bot for boat with the final delta of 4 minutes 20 seconds, alchemy nudging out Holua. The 2013 Cabo Race had 9 sleds for the 800 mile race with Alchemy and Pyewackit battling it out all the way this time Pyewackit taking the honors. Building up to the 2013 Transpac 5 sleds made the start. Alchemy sailing with most (8 of 10) of the same crew as the previous two Transpacs had undergone a few modifications, lots of research and lots of practice. On board were owner Per Peterson, Navigator Artie Means, Watch Captains Chuck Skewes and Will Stout, bow men Patrick Koranda and Jay Davis, along with Brad Rutenik, Mike Hurlihy, Greg Clark, and Scott Harris. 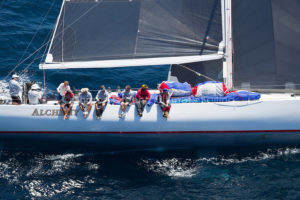 With a great weather window July 13th the battle began. Pyewackit went out to an early lead but Grand Illusion and Alchemy were keeping the pace on. On day 3 with boats in spinnakers Alchemy headed down to the south lane and quickly over took the fleet by just minutes. This forced Pyewackit to move south and try to cover the gains made by Alchemy. The battle between Pyewackit and Alchemy stayed close for days. Alchemy was gybing up to 15 times a night to stay on the windier side of each cloud and squall. Each boat made gains alternating back and forth for several days. Five hundred miles from the finish Pyewackit made a gain by being just outside of a developing front giving them a 20 minute lead. It was a trying moment on Alchemy as it was the biggest gains against us since the first night. As the leaders approached the islands the opposite happened. Alchemy found more breeze to the north with pyewackit in lighter air off of Maui. Alchemy sailing in 8 knots more wind was making large gains. The Molokai channel, notorious for being the windiest place of the 2250 mile race was acting a little unseasonal. Traditionally it is the windiest part of the race and is where boats plane at record setting pace right past the finish at Diamond Head. This year the channel was very anti climatic. The wind died as both boats sailed across and Pyewackit finished while there was still some breeze and Alchemy at the start the sled fleet quickly over took earlier starters and finished drifting the last mile or two allowing enough time to pass for Pywackit to win the sled class. Pyewackit was 1st in class and 2nd overall, Alchemy 2nd in class and 3rd overall. Both boats left it all on the race course and sailed a great race pushing each other 24 hours a day for over a week. The welcoming party put on for Alchemy by the Makani Kai Yacht Club was second to none. With some of the best food, and highest quality libations it went on for a mere 7 hours.

Alchemy was delivered home by Jay Davis, Holly Davis, Eric Davis, Nick Fulbright, and Ryan Baillie. The future of the Alchemy racing program is in limbo for a little while. The boat will need a few things and the crew needs to spend a little time with their families after such a commitment. It is the greatest team I have ever sailed with. The commitment to improve and work hard regardless of the circumstances makes it a real privilege to sail with these guys.