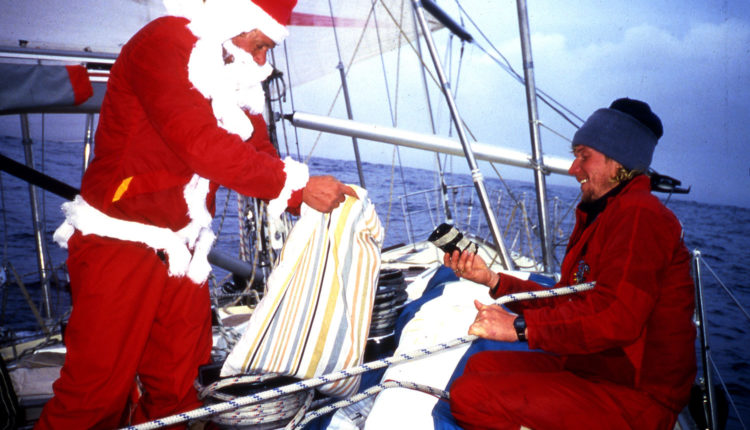 A Christmas at sea can be a very special thing. I have enjoyed 55 Christmases in my life and as far as I can remember they have all been great, but of them all I can only really remember two. The others have blurred into a mirage of tinsel, carols, food and family. The two I do remember were the Christmases I spent at sea. 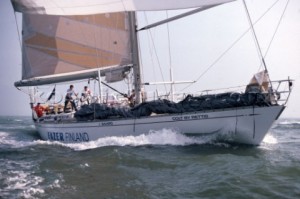 In 1984 I raced across the Atlantic from Spain to the Caribbean. I was training a crew of Finns who were preparing to race the 85/86 Whitbread Round the World Race. Most of the race had been uneventful, a trade wind passage with a following breeze and permanent tan. About two thirds of the way across we got hit by a nasty, compact cold front, but we were prepared for it and we were soon through the worst of it and back into shorts and T-shirts. We were done with the front, but the front, however, was not done with us. It spun into a tropical depression and reversed direction. It was now traveling toward the west, just as we were, but it was moving faster than our Swan and gaining on us. It was also gathering steam and the wind numbers were flirting with hurricane strength.

San Salvador island in the Bahamas was a mark of the course. We were following Columbus’s route and the small island was to be left to port. We would then head for the finish in the Dominican Republic. Our navigator crunched the numbers. If we could average 9 knots we would stay ahead of the depression until San Salvador. Unfortunately our course would then take us in a southeastly direction, back toward the storm which had just been given a name: Lily, a rare December hurricane.

Christmas morning 1984 dawned bright. Our gift was to be the first sight of land in 26 days. We would round San Salvador and gaze upon white sandy beaches, but we would also turn and head directly into the storm. We were helpless. There was no place in the shallow waters where we could hide and no place to run. Our best bet was to get out into deeper waters and hunker down. Reports on the radio from other boats in the fleet told stories of huge seas and gale force winds, but lucky for all no real damage. The skies started to darken and air was muggy and hot, hanging listless, a definite calm before the storm. We waited and by dark on Christmas night the wind was on the increase. Our crew were all strapped on, minimum number on deck, the rest below where it was safer. By midnight we had more than 50 knots,the boat was taking a bashing by doing OK. The real brunt of the hurricane was due to hit at dawn. Then we got our real Christmas gift, this one from the wind gods.

Hurricane Lily took a sudden left turn coming ashore in Haiti and losing strength as it went over land. The forecast 60 to 70 knots never materialized. All we saw was mid 50s. By the following afternoon there was no sign of the hurricane and we sailed down the back side of the Dominican Republic for a finish in Santo Domingo.

Exactly a year later I was rolling through the Southern Ocean racing the Whitbread Race on a boat named Drum. The boat was owned by Simon le Bon, lead singer of the rock band Duran Duran. It was Christmas morning and a thick fog hung above a leaden sea. The fog meant that the weather was unseasonably warm, around 40 degrees, and we all gathered on deck to celebrate. Santa arrived with a bag of goodies which had been picked out by the wives and girlfriends left behind. They were appropriate gifts for men who had been at sea a long time. 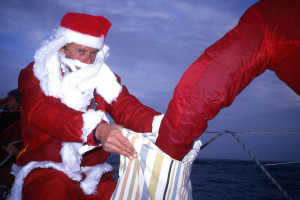 There was a quiz to get your present. We each had to answer a Trivial Pursuit question, made up of course. I remember mine, “How many people are there listed in the Tokyo phone book,” Santa asked. I took a guess. “Six million.” Santa studied his notes. “Yes that’s correct,” he said, “now tell me their names.”That Christmas was memorable for the meal. We had been eating freeze dried food for almost a month and while edible, it was barely palatable. For Christmas the cook had saved a massive smoked salmon and served it with onion, capers and chilled Russian vodka. 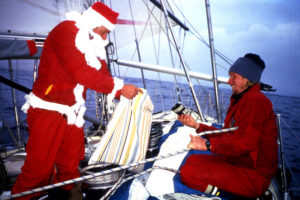 Here’s wishing everyone a safe and fun holiday season whether you are on land or on a tiny boat bobbing along in the middle of the big blue yonder.

How To Winterize A Boat Pt. II

Merry Christmas 2014 from Get Wet Sailing