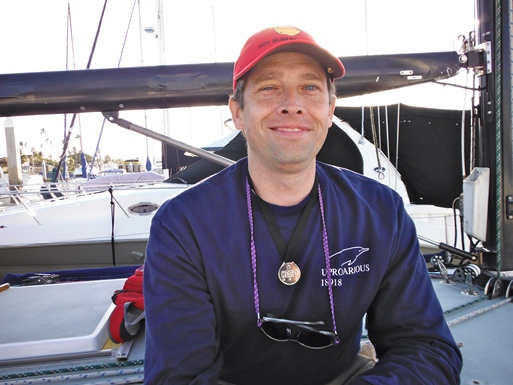 In Membory Of Craig Williams

I was especially saddened by a tragic accident off the Coast of San Clemente Island in Southern California during the sailing race “The Border Run” 2013.  The following is from the website http://www.theborderrun.org/ and tells some of the circumstances related to this accident.

On Friday March 9, 2013 at approximately 9:26 pm, while participating on the 4th annual Islands Race, the crew of Uncontrollable Urge reported rudder failure on their VHF marine radio. They were in the vicinity of San Clemente Island at the time.  The crew attempted to launch a life raft and attempted to set an anchor before abandoning the vessel to swim to shore. The vessel was reportedly destroyed by the surf at the shoreline of San Clemente Island.

A Coast Guard helicopter crew hoisted the six sailors and brought them to the San Diego Coast Guard Sector where they were met by emergency medical personnel for transport to a local hospital. Unfortunately, one of the crew members was deceased. The San Diego County Medical Examiner identified the man who was killed as 36-year-old Craig Thomas Williams, of San Diego.

Below is a statement from the crew of Uncontrollable Urge about this tragic event:

“As we try to piece together the horrific events of Friday night and early Saturday morning, the crew of Uncontrollable Urge wants to express their appreciation for the support of the sailing and land-based communities at this difficult time. We are all grieving and share in the loss of  Craig Williams, a beloved family man and team member. There are no words to express how much Craig meant to each of us, and we know how much his loss is felt in the Williams family.

From his family, “Craig was a beloved husband with a 2 year old daughter, Claire and one on the way. In lieu of flowers, the Williams Family is asking for assitance to The Craig Williams Family Memorial Fund. Proceeds will help cover memorial costs and any extra funds will be rolled into a college fund for Claire and Craig’s unborn child.”

I am deeply saddened by this loss. I did not know Craig or his family but felt moved by the many sweet remembrances found on the site listed below. Here at Get Wet Sailing our Prayers go out to his wife and family.